The project for a free-standing multi-family residential building was created for our long-term clients, with whom we’ve always worked smoothly. Architecturally speaking, we tried to add variety to the abundance of blocks in Sofia with an architecture, that is at the same time memorable and distinctive from the surrounding residential structures. The building has eight standard residential levels, a pharmacy on the ground floor and underground parking space.
Our initial research taking different directions is what led us to several possible options. The characteristic accents resemble square pixels on the facade. Large glazings lighten the structure of the ground floor, but also in height the vertical communications. 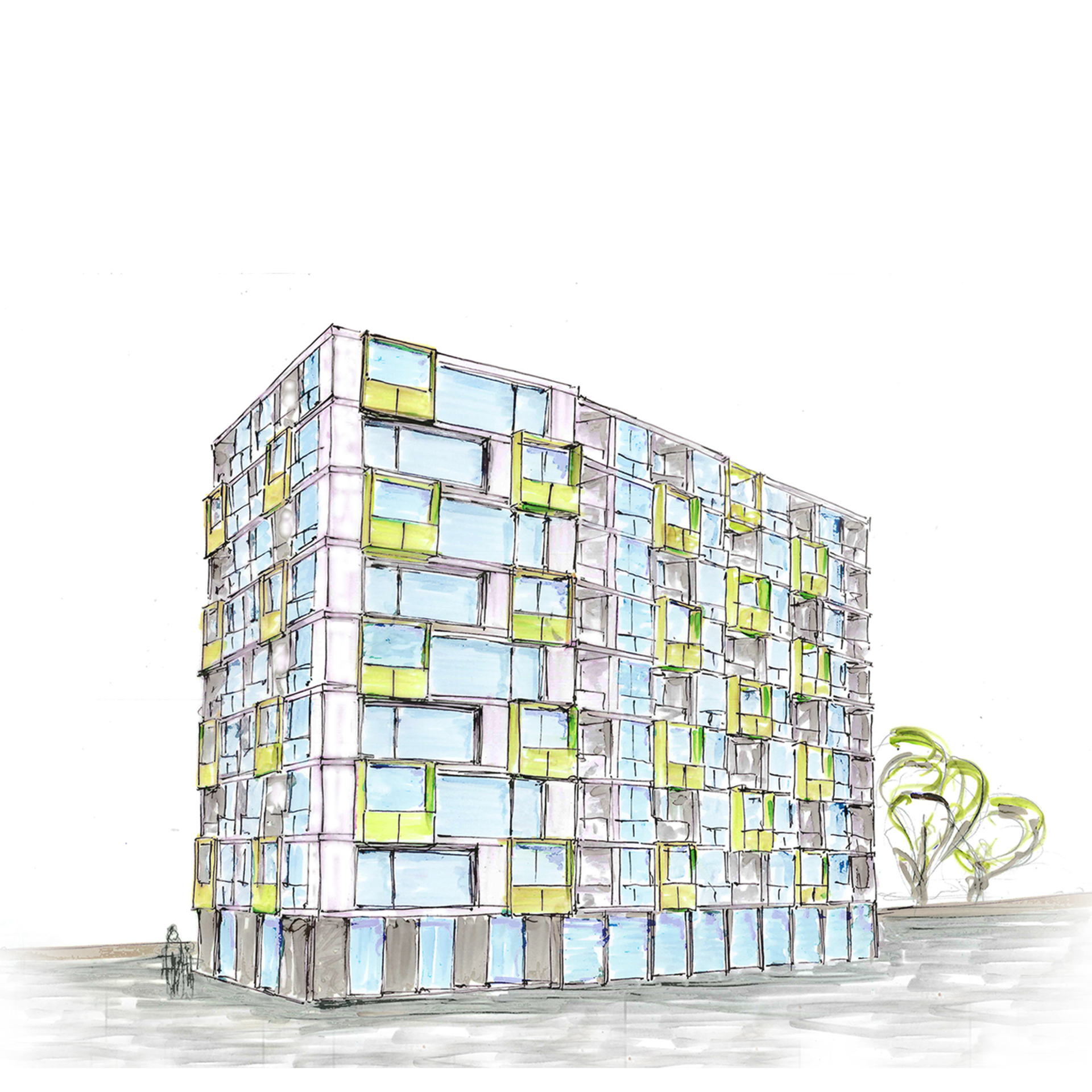 In the presented solutions we offer a special treatment of the accents in either color or covered in wooden veneer.
When designing the external facades, we use several different materials - enameled glass for the suspended facade, with a cap, triplex in detail; and for the suspended ventilated facade - HPL boards, as well as conventional white sprayed silicate plaster. Thermal insulation is assured by mineral wool on the suspended facade, and EPS / XPS in the areas with plaster.

Different variations are entertained, in which the impact of the location and size of the window openings are considered. 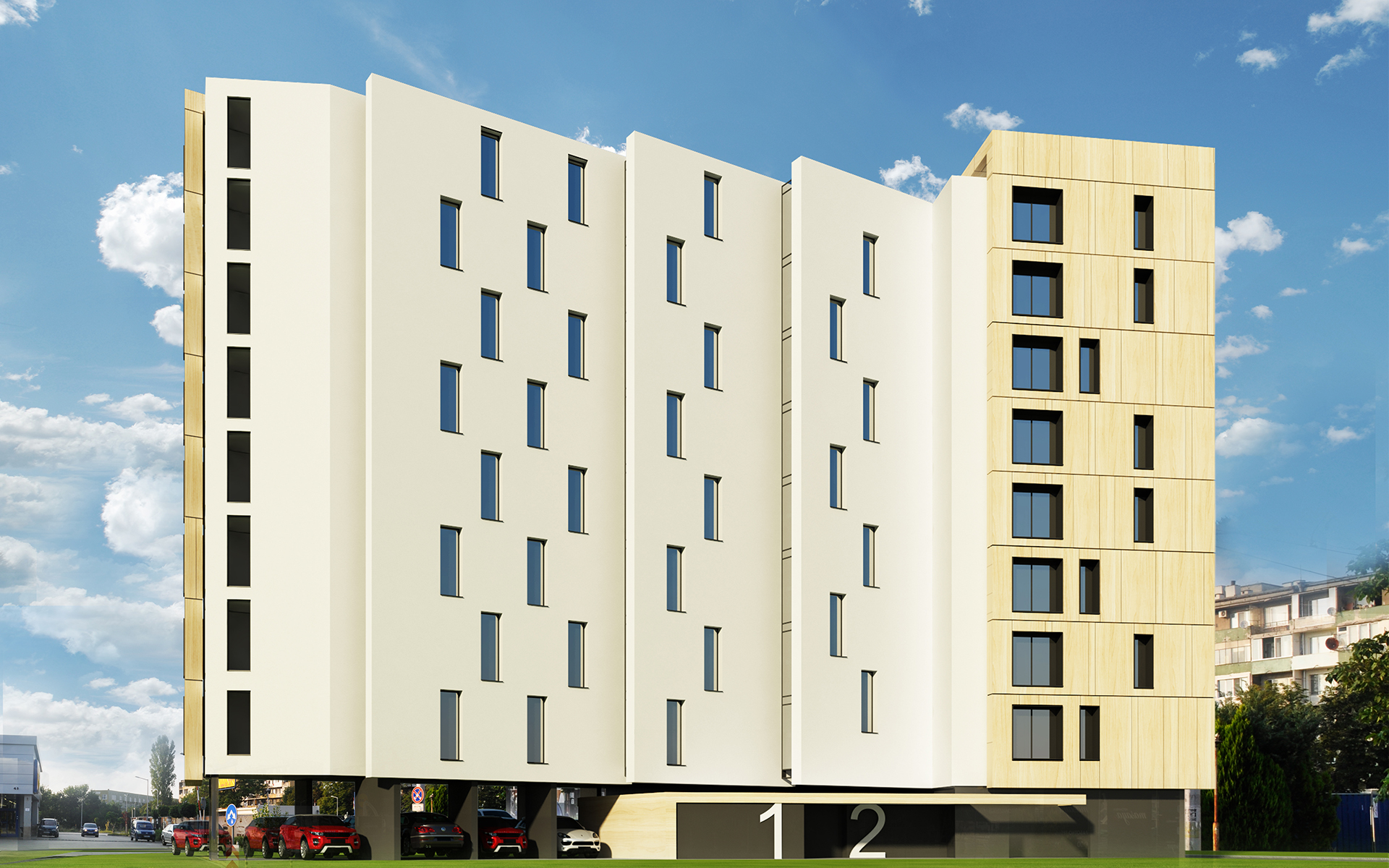 On each floor are developed 7 apartments in both wings of the building.

We will present you in detail the apartments from wing A. The one-bedroom apartment is type 1. Inside of it we have an entrance hall, bathroom, closet, living room with kitchenette, bedroom with a loggia to it, which is also accessible from the living room/ kitchenette. The three rooms have a direct functional connection and a southern exposure.

The other one-bedroom apartment, type 2, has the following layout: from the entrance you enter directly into the common area of ​​the kitchenette and living room. There is a bathroom, a closet and a separate bedroom. All the primary functions of the apartment - living room and bedroom, look to the south via the suspended glass facade. 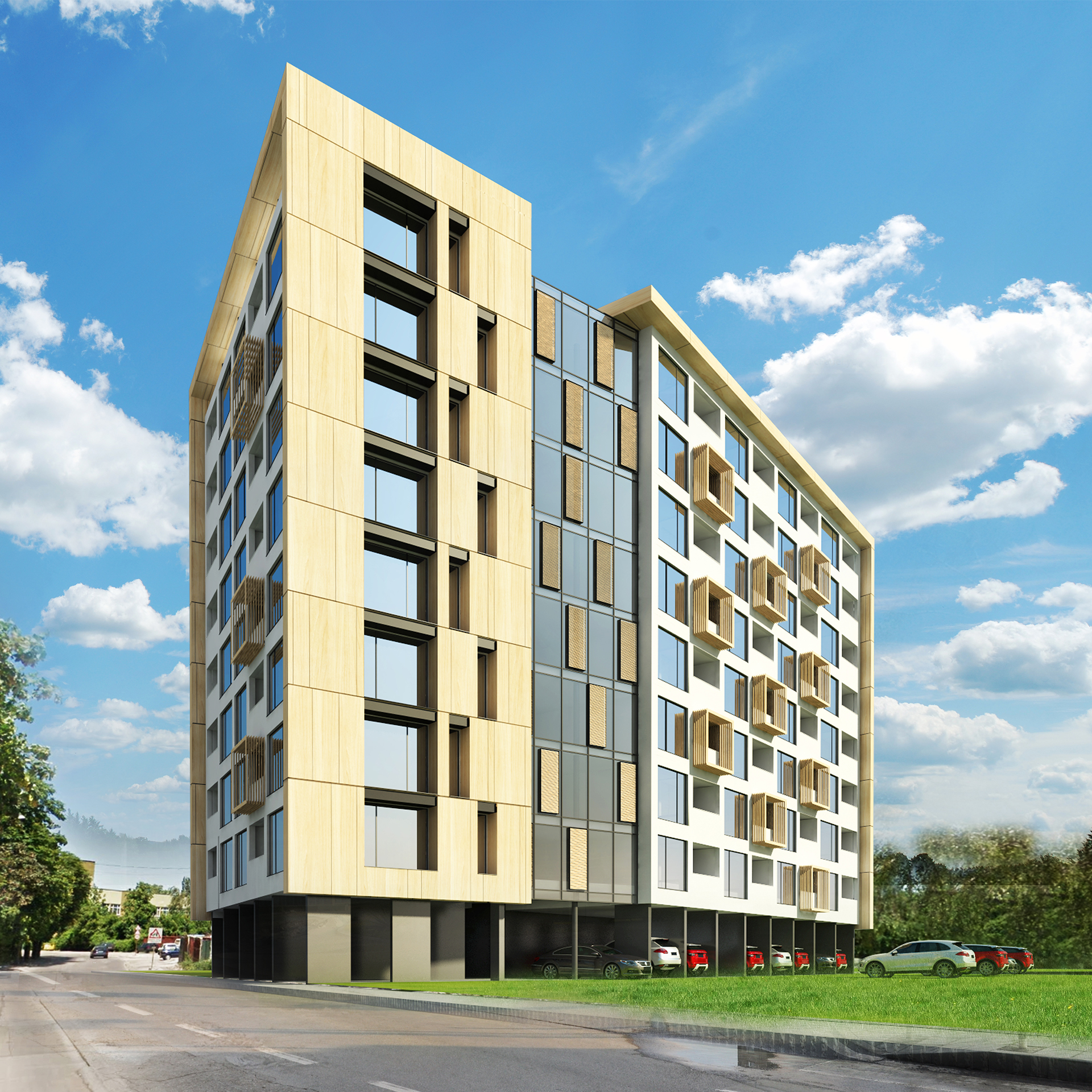 The type 4, two-bedroom apartment, includes a corridor, bathroom, toilet, closet, two bedrooms, living room with dining area and kitchenette, and loggia. The living room with the kitchenette and the loggia have a direct functional connection and a western exposure.
One bedroom is also west facing and facing the loggia. The second bedroom is mostly facing north, but has rich glazing on its east wall. 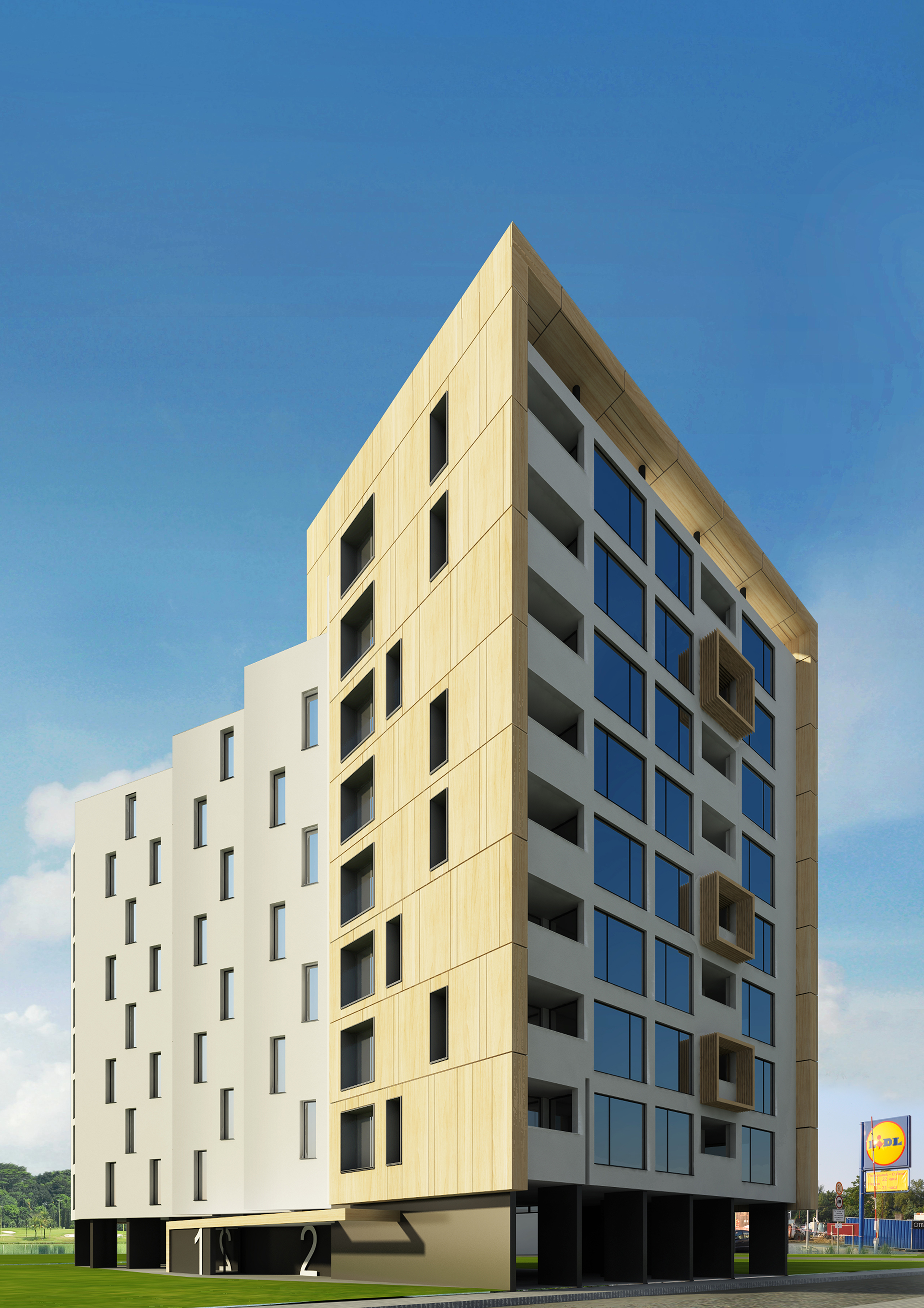 In the second wing, B, we have two types of apartments - one and two bedroom.
We have designed a total of 56 apartments as for 35 of those there is a covered parking lot and additional 21 open parking spots.
In the basement of the building we have provided three separate rooms, designed as storage spaces for bicycles. 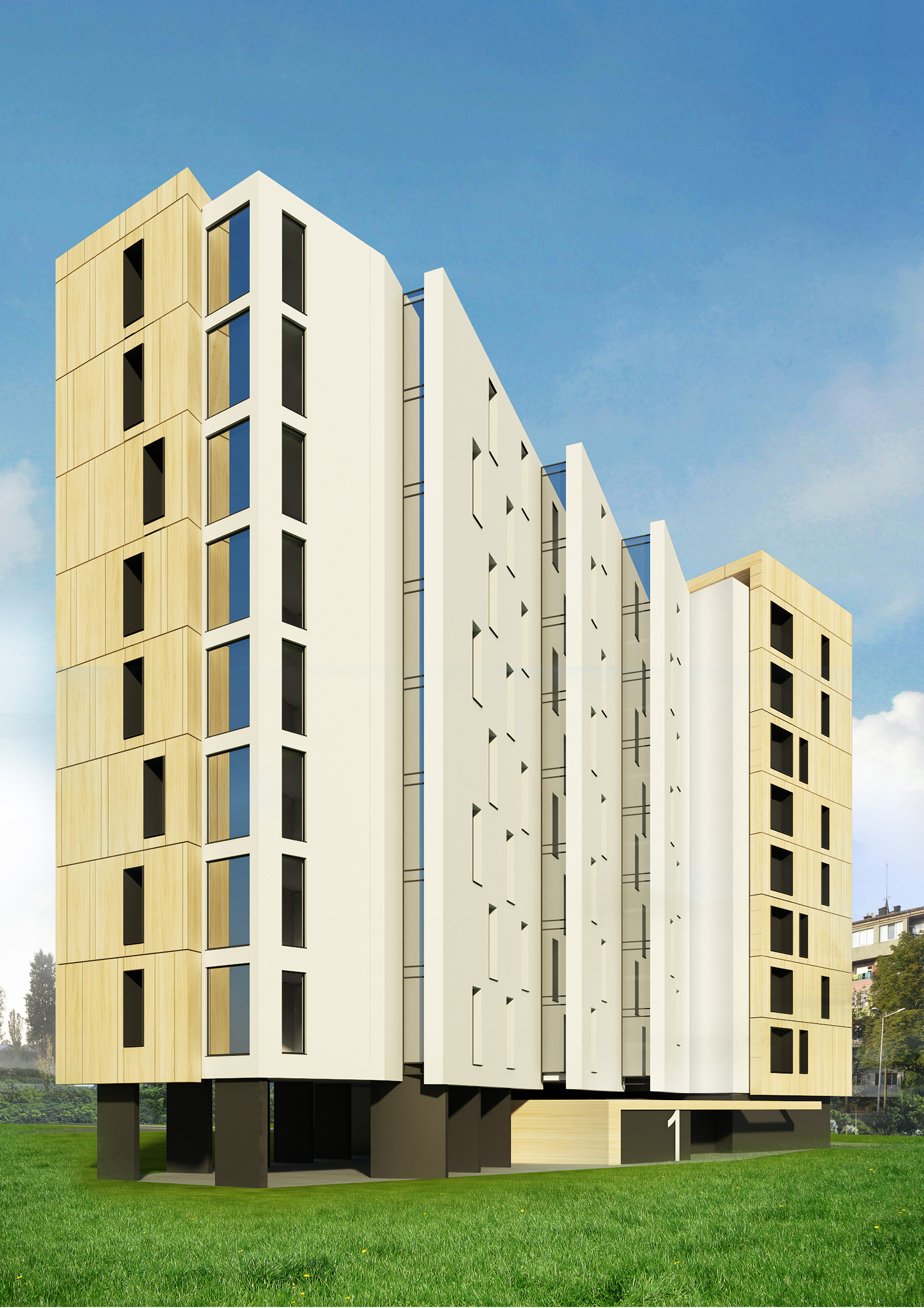 You will find out the end result from the realization of the final object, with which we will acquaint you in detail. One thing is for sure - in these modern homes you will live comfortably and pleasantly, as for the city, it will be enriched with a new fresh and modern silhouette. 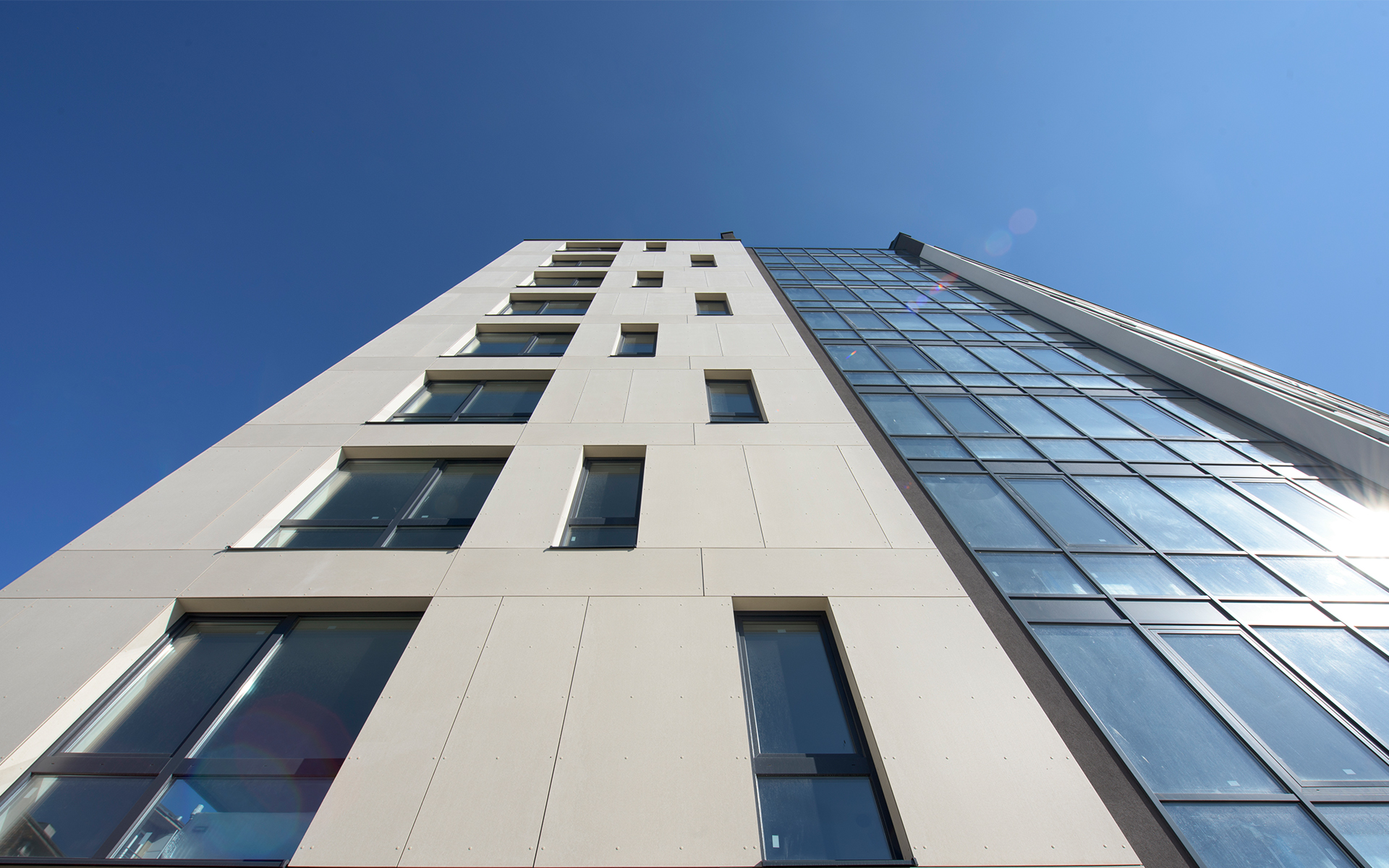 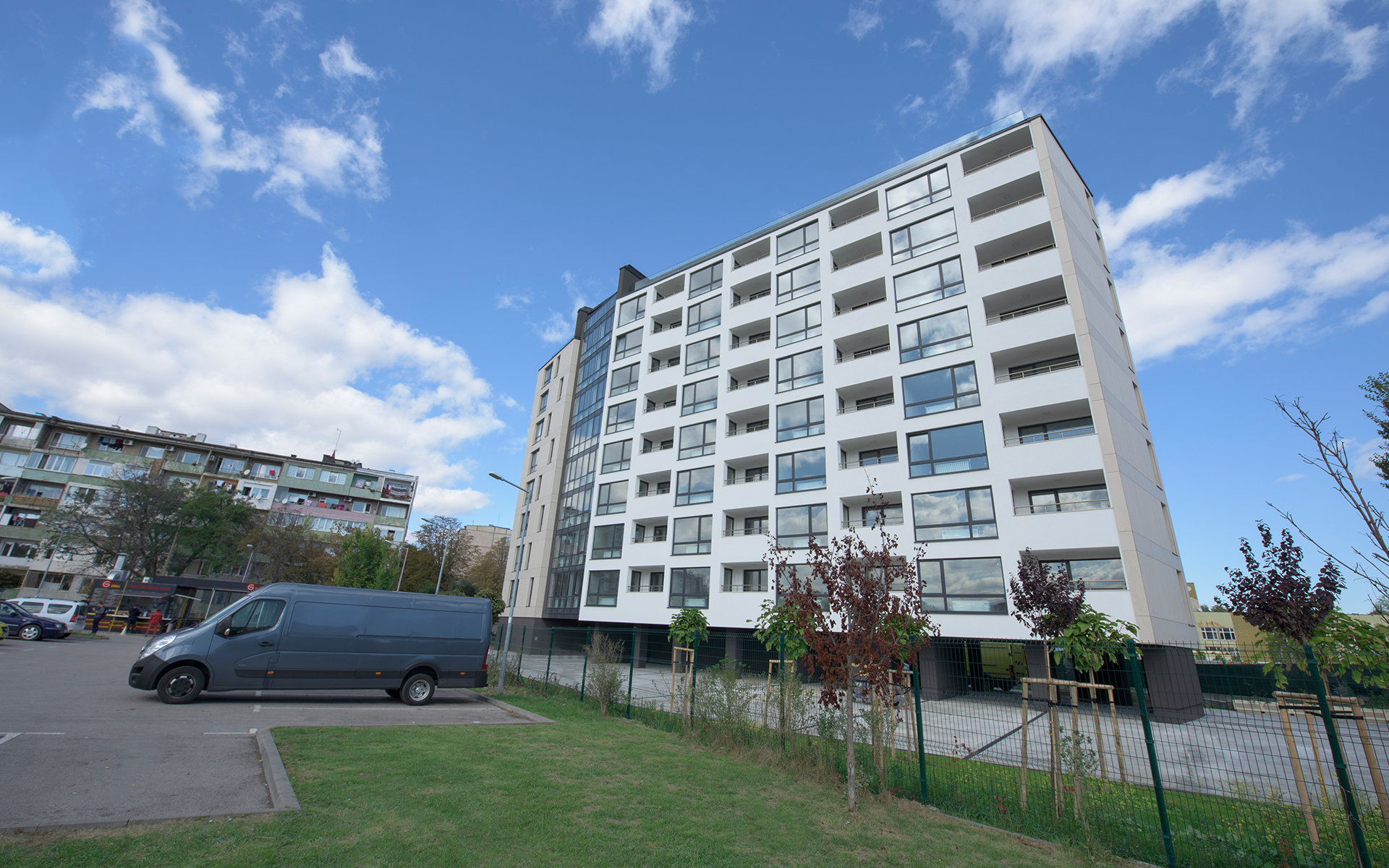 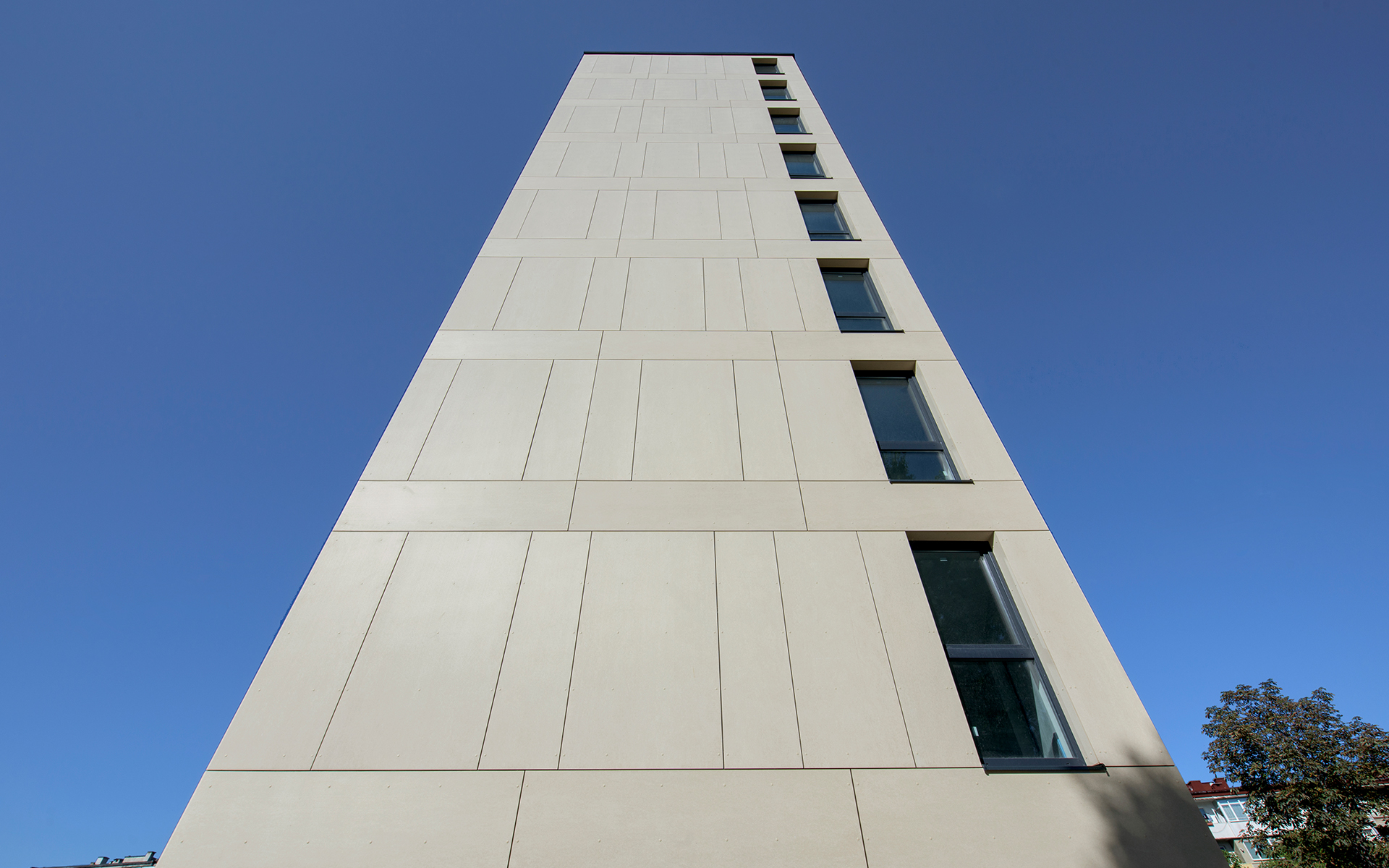 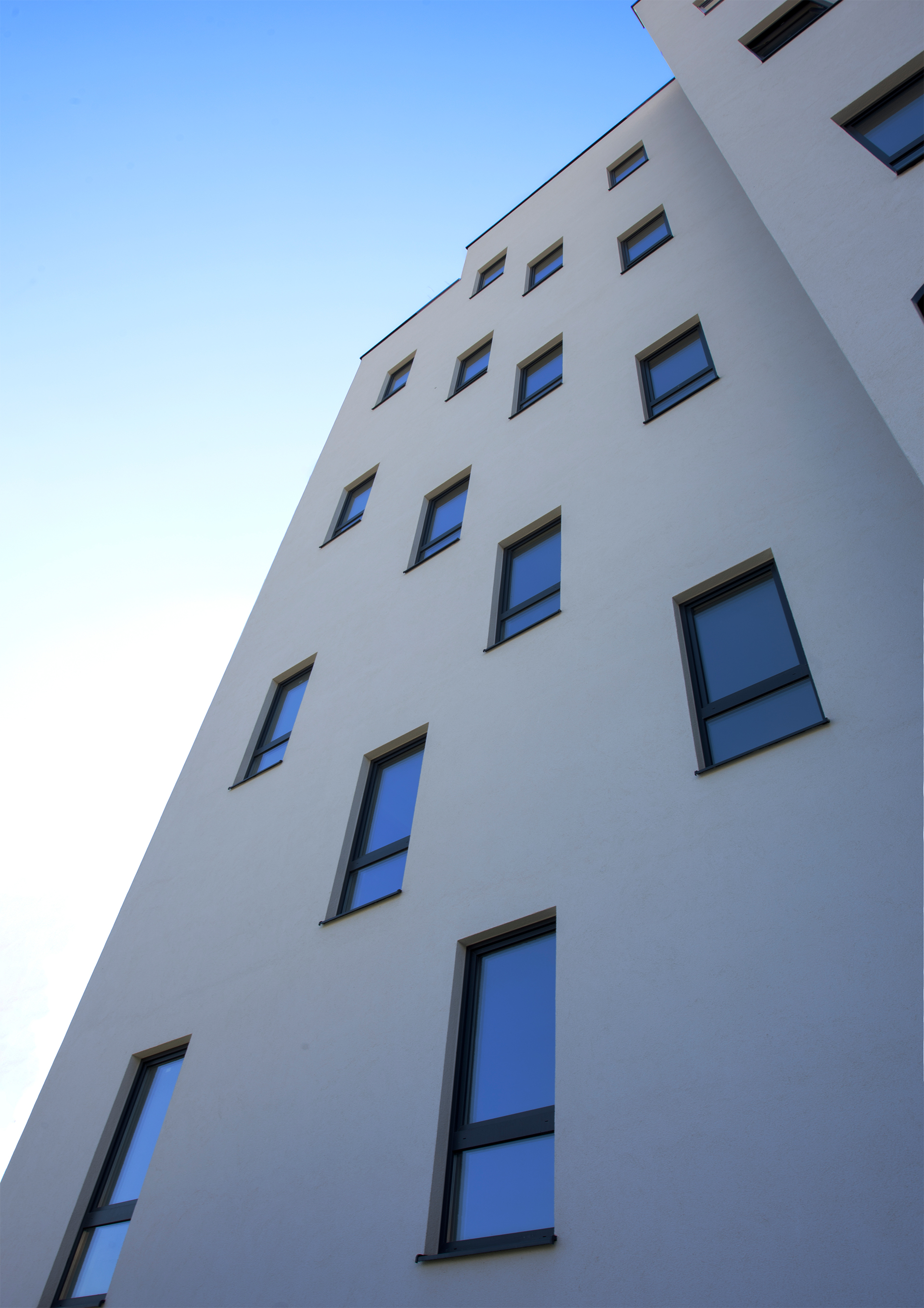 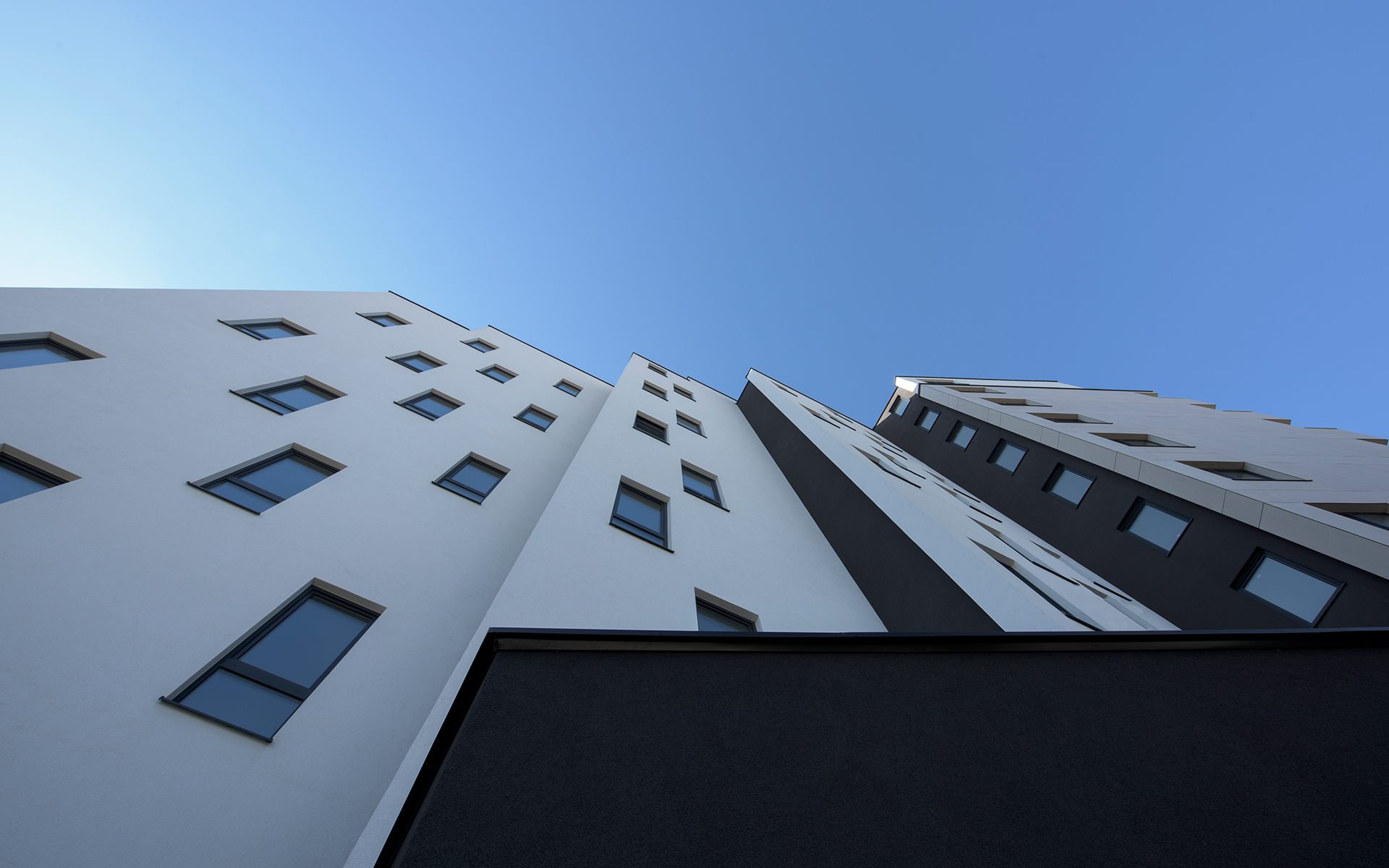 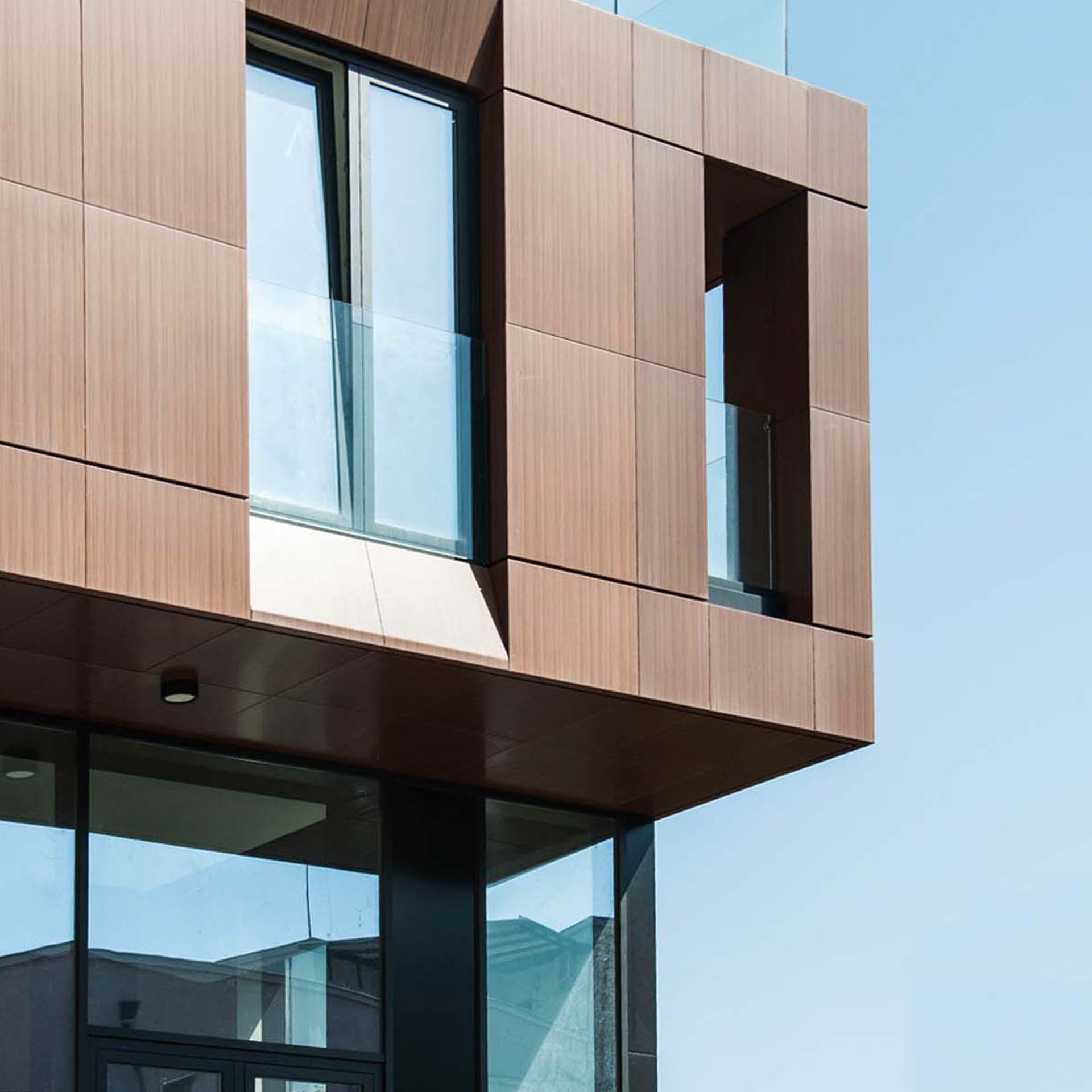